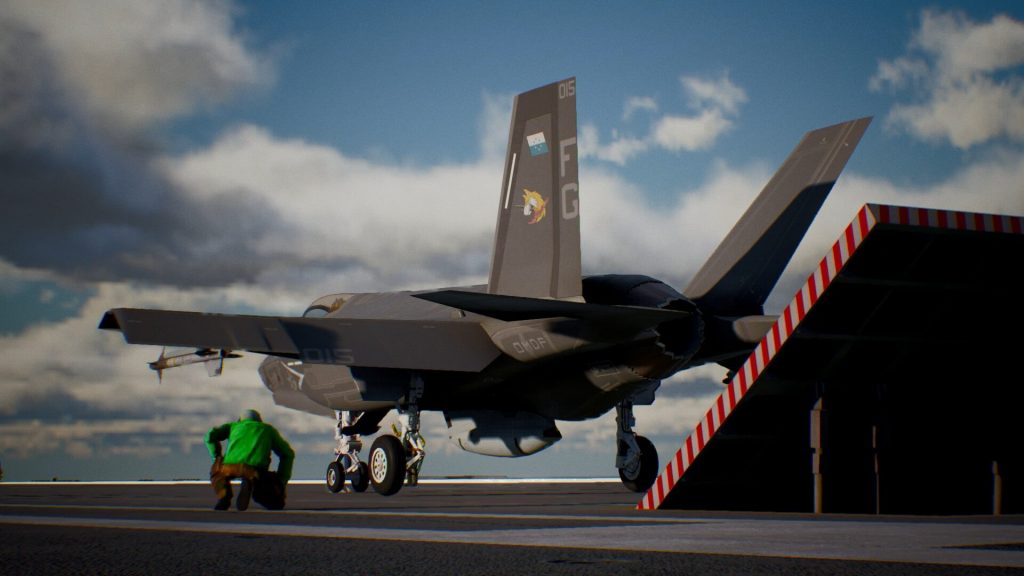 As you might know by now, the newest addition to the highly popular flight simulation series, Ace Combat, was announced as a PSVR title all the way back in 2015. So Ace Combat 7: Skies Unknown will – while still sticking to it’s multi-platform roots with the main game – also feature a virtual reality mode exclusively for PSVR. The game was set to release this year after many postponements, but unfortunately, the game has been postponed again and is now set to release sometime next year.

We met up with the guys from Bandai Namco at their E3 booth, where they are demoing the game as well as its VR mode. “For something like Ace Combat – it’s a natural evolution for something in this genre. I used to fly in the military and what they told us is that when you’re in combat you should keep your head on a swivel. If you just look straight ahead then you’re not going to last. Pilots track enemies with their heads. So VR adds that element of realism,” said David Bonacci, Brand Manager at Bandai Namco Entertainment America.

Bonacci also assured us that the VR missions in Ace Combat 7 will have the same deep storyline and will feature the same chaotic battles and tumultuous aerodynamic maneuvers as the flat screen version. “There’s going to be a deep story, similar to the one you had in the previous Ace Combat games. It’s going to be a very deep story that’s set in the strange-real universe. Strange-real is a term coined by the fans for the alternative universe that Ace Combat is set in. It’s strange because it has a different history and continents but it’s real because we’ve got real-world aircraft over here, that are recreated in very high fidelity,” he continued. We did ask to hear more about the storyline, however, he didn’t want to reveal any more details about the story at this time.

Bandai Namco only gave us a small taste of the full game at their E3 booth, but it was enough to get an idea of what the game will be like. As well as to get super hyped for its release. Virtual reality has the ability to make a great experience exhilarating, and probably nothing out there right now shows this as much as Ace Combat 7. For the demo I climb into the cockpit of an F/A-18F Super Hornet. Bonacci tells me that I’m seeing exactly what a real F18 driver would see. And that they have got a full arsenal of these real-world aircraft in their game.

When starting off I find myself on an aircraft carrier, ready to take off. But there’s also plenty of time to look around and admire the cockpit as well as the views outside the F18’s window. Then it’s time for takeoff and the effect of my stomach sinking to my knees feels quite real. At first, I was scared of getting a little sick in front of all those people on the E3 floor, but to my amazement, the game didn’t elicit any sense of motion sickness in me. Even when doing the topsy-turvy turns at breakneck speed.

“The development team are pros at getting every little detail about aerial combat recreated in this game. Every little thing like aerial chatter, the visuals, the pacing is created with meticulous care,” he continued. Apparently, they took just as much care with the VR integration as well. If this had been real life, I would have lost my consciousness and some unnamed bodily fluids almost instantly, but Ace Combat 7 on the PSVR just left me with a sense of exhilaration and excitement. Lucky me.

From the giddy feeling I got, flying at dizzying heights through the clouds, far above green islands below, I knew this game will set the benchmark for VR flight sims forward. Not that there are many other flight sims available for virtual reality right now. Which is just mind-boggling. Ace Combat 7 also offers beautiful vistas which almost made me want to just fly around and admire the view for a while – but the resolution overall isn’t where I would like it to be. Still, that might be more of a hardware issue – there’s only so much the PSVR can offer in the graphics department after all. So even though the VR version won’t feature the full main campaign, I can’t wait to experience more.

According to Bonacci, the VR mode of Ace Combat 7 will take around 12 to 15 hours, depending on how proficient a player is and his style of gameplay, to complete. So make sure to watch out for Ace Combat 7: Skies Unknown in 2018.

ARLINE GROENEWALD
I'm a freelance writer and editor with a penchant for puns (but my puns are 🐨☕) and a preternatural love for RPG and strategy games. Also, I spend way too much time playing board games.

No spam, notifications only about new products, updates.
PrevPreviousVR Games We’re Expecting To See At E3 2017
NextUnearthing Mars Is Coming To Rift And Vive On June 23Next