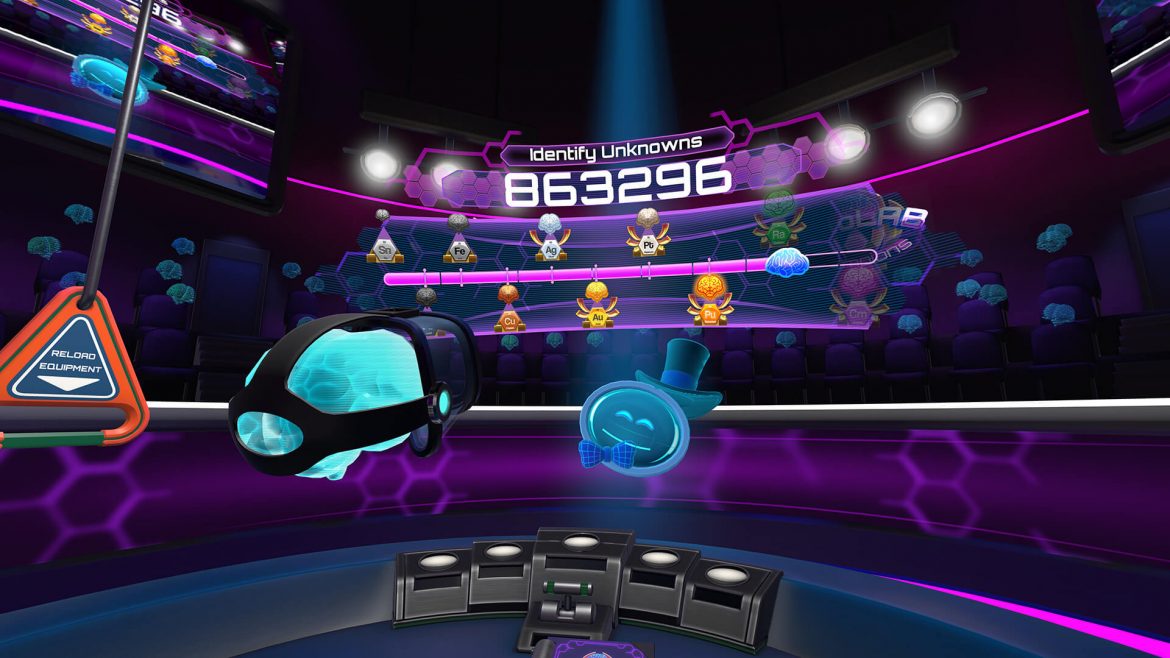 While you might already be familiar with Shell Games for their VR spy puzzler, I Expect You To Die, the studio is now making waves in the VR education field with their latest title, HoloLAB Champions.

Released this week for HTC Vive, HoloLAB Champions turns you into a glowing brain and invites you to take part in a spacey game show where a robot host named Earl and his camera robot sidekick will help you through various science-related challenges. The title is mainly aimed at getting students interested in subjects like chemistry by creating a fun and safe environment for them to learn and experiment. Even so, when I tried my hand at mixing liquids while Earl talked about measuring and concave meniscus, I realized that HoloLAB Champions can be a great experience for adults as well.

Check out my gameplay video:

Right now, HoloLAB Champions offers two “episodes” with ten levels and a final round each. The first episode is called ‘Chemiluminescence’ and teaches you ins and outs of lab safety and measuring and mixing different chemicals. The second “episode” or mode if you’d like, is called ‘Identify Unknowns’ and puts various unidentified substances in front of you to correctly classify with a limited amount of reference information. It wasn’t always as exciting as the other mode, but it was still a much more fun way to learn than the traditional way.

It starts off pretty easy and then quickly starts ramping up the difficulty with every subsequent level. Each time, the game introduces a new element (I’m not talking about those on the periodic table, though sometimes those too) on top of what you’ve already learned. When I completed a level, the game would award me a score based on how quickly and accurately I completed the tasks, while deducting points for any spills or other mistakes.

It was a lot of fun getting to experiment with different chemicals in VR, and definitely a great way to learn about a subject like chemistry. However, I also found that using virtual reality results in a couple of problems along with the obvious safety solutions it offers. Mainly in the accuracy department. Since HoloLAB Champions focuses on having its student ‘contestants’ be as accurate as possible, it can be hard to complete a level using the VR controllers. I myself struggled quite a bit to get to the level of accuracy the game demands, which lead to not a little bit of frustration.

Other than that, the game flowed pretty smoothly and kept me engaged enough to want to keep going. Which is great news for teachers and parents who are looking to inspire their students to learn. Or even for people who are simply looking to challenge their own knowledge in a game-like setting. HoloLAB Champions feels polished enough that it can be enjoyed by young and old alike.

Still, this game is clearly meant to be educational so don’t expect a fully stocked scientist’s lab where you can mix up your own experiments at will. HoloLAB Champions is a very scripted and linear experience, but that is exactly what it was created to be and it does a great job of showing the future potential of virtual reality in education.

HoloLAB Champions is available now on Steam for HTC Vive at $9,99 US, but is free for teachers, students, and facilities who register on the company’s website.

Hands On: Kickstarter for ManMade Begins and We Take a Look at the Concept Demo