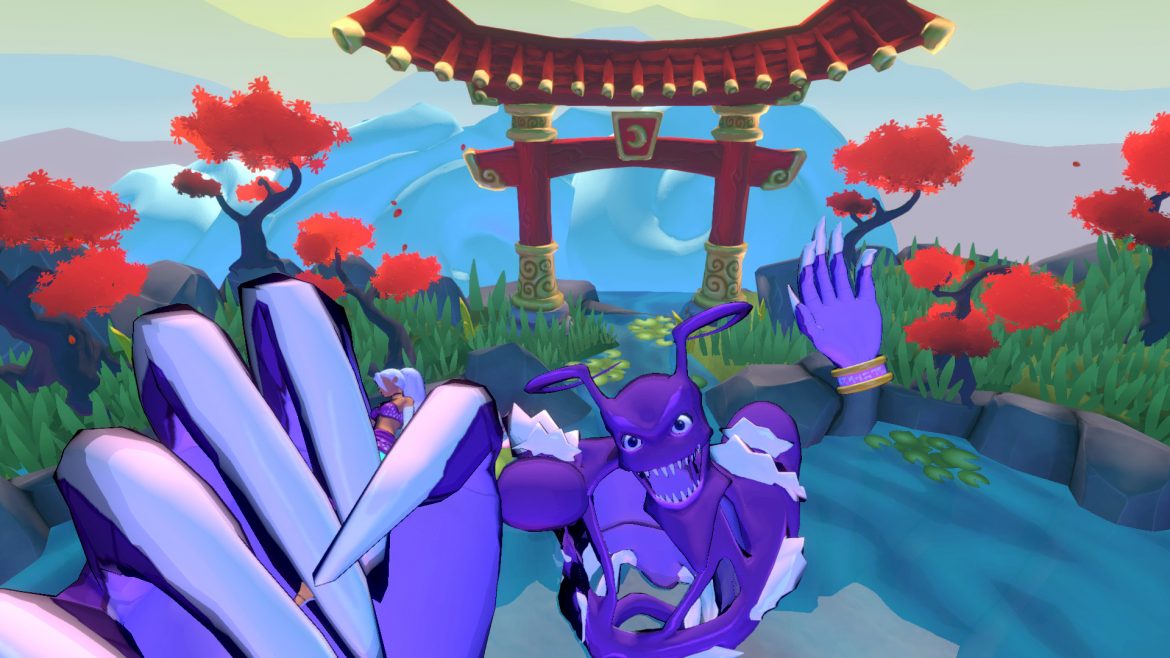 Nemesis Realms Review: Don’t Dream It, Be It

Nothing beats a good boss battle. Gathering up your group of friends and taking down that epic foe through tactics and teamwork, it just feels great. But, what if you could take on the role of the boss and experience the fight from the other side of the game? Evocat Games set out to answer that question in their latest release, Nemesis Realms.

I know what you’re thinking. What are all your friends going to do while you play a big bad monster? Well, they are going to team up and try to take down the boss of course. It wouldn’t be an epic boss fight any other way. Let’s jump right in and see what Nemesis Realms has to offer.

In Nemesis Realms up to 5 players will engage in an epic boss battle. One person uses the HMD to play as one of three available bosses. This player has only one objective, to use their powers to kill the other players.

The other four players will take on the role of the brave souls who have come to slay the boss. They will try to use their superior speed, in conjunction with powerups and level mechanics, to kill the boss. Combat takes place on one of three arenas, each catered to a specific boss encounter.

The concept behind this VR boss fight is simple, and that is probably why it works so well. When you put on the HMD, you don’t feel like you’re in the same room with the other players. It is easy to take on the role and wreak havoc on the other players. At the same time, trying to take down a monster that isn’t bound by any preset mechanics, is challenging and fun for the other players.

Each boss has a different way of trying to kill the other players. You get one that just smashes or throws opponents he plucks from the air. Another has two dragons for hands. One that launches out at the other players, and one that shoots fire. The latest boss to be added, can shoot waves of claw marks at the players. These go out in any shape that you swipe your claws through the air in. In addition to that, he can send out an arcane bomb that exploded on demand and freeze players with ice shards.

As the boss, you have plenty of offence, but very little defense. This isn’t too noticeable in 1v1 or even 1v2 combat. But, once you get to 3 or 4 other players, your slaughter fest quickly turns into one of keeping players distracted long enough to whittle them down one by one.

The other players need to keep moving at all times if they want to survive. They can jump, glide, and dash their way around the arena at the cost of stamina. If you deplete your stamina, you take damage. Teamwork really comes in handy when it comes to movement and distraction. The hero players can also use speed, invisibility, and health power ups that spawn randomly during the game.

The balance in Nemesis Realms really starts to shine when you have 2 to 4 hero players going against a boss. The 1v1, just feels a little too easy on the boss side of things. While going against 4 players can feel a little bit overwhelming, it still manages to be fun and challenging for both sides.

You actually have a very large amount of control over the gameplay thanks to all the custom variables available. Before each match, you can set the damage, health, available jumps and movement speed of each hero character playing. You can also change the damage and health of the boss. Seeing as how this is a party game, having these options can really keep the game from being too easy or too difficult.

Controlling the boss with the motion controllers is pretty straightforward but does very from boss to boss. Lucky the game has a pretty solid tutorial for each one. The first boss is as simple as smashing your fists and gripping players before you toss them. The second is a bit more challenging. You need to thrust one of your dragon headed arms to get it to shoot towards the players, while the other sweeps across to burn a trail of destruction.

The newest boss, the Lich, is the most complex. You have motions used from the last two bosses, in addition to some new ones. You even have a little control over the arena with this one. While it is more to manage, it is also the most rewarding once you get it down. The hero controls are pretty simple and can be mapped to the controller of your choice.

Overall, the controls are very well done and those that are not obvious are explained well enough. Best of all, the developers allow all the game options to be setup in and out of VR. Not having to remove the HMD to setup a match is a great touch.

Graphically, Nemesis Realms is well polished for the art style Evocat went with. You get a nice mix of vibrant color, with some pretty cool effects. The bosses themselves do look a little too cartoonish, with the first being the most lackluster. The three hero characters all have a decent level of detail, and each look unique.

The second and third boss both seem to have received more love than the first, and that shows. The same can be said with the arenas. While all of them look good, you can definitely see a major improvement in quality in the second and third.

The audio is also another are that Evocat Games nailed. The sound effects are well done and the music definitely fits the game. Best of all, you have total control over all the sound settings, in the options menu.

Nemesis Realms has a lot going for it. You can see a trend of things getting better with each addition to the game, and that is always a good sign. The amount of care that has gone into the latest boss and level, really show in both gameplay and graphic quality. When you can get two or three other people to join you for some fun, this game kills. However, it does suffer from a few flaws.

Gameplay with one other player is pretty one sided. The ability to adjust the match settings does help this, but most of those options just shorten the round time, making the overall experience less fun for both players. There is also the issue of this being local co-op only. If you can’t find people to come over and play, you won’t have any use for this game.

That brings us to the price. Nemesis Realms is $14.99 on Steam. If this game had the ability to be played online, or against AI, I would recommend it in a heartbeat. Unfortunately, it is a great game that is unplayable unless you have company over. With that kind of limiting factor at play, the price does feel a little high. That said, snatch this up when it goes on sale, or if you know you’re going to have a group over, because this game is a total blast as a party game.

I am a freelance VR content reviewer and narrative game designer with a love for all things game related. I enjoy allocating stats and rolling dice as much as gripping controllers and clicking mice. If I was stranded on a desert island with only one thing, it would be a D20.