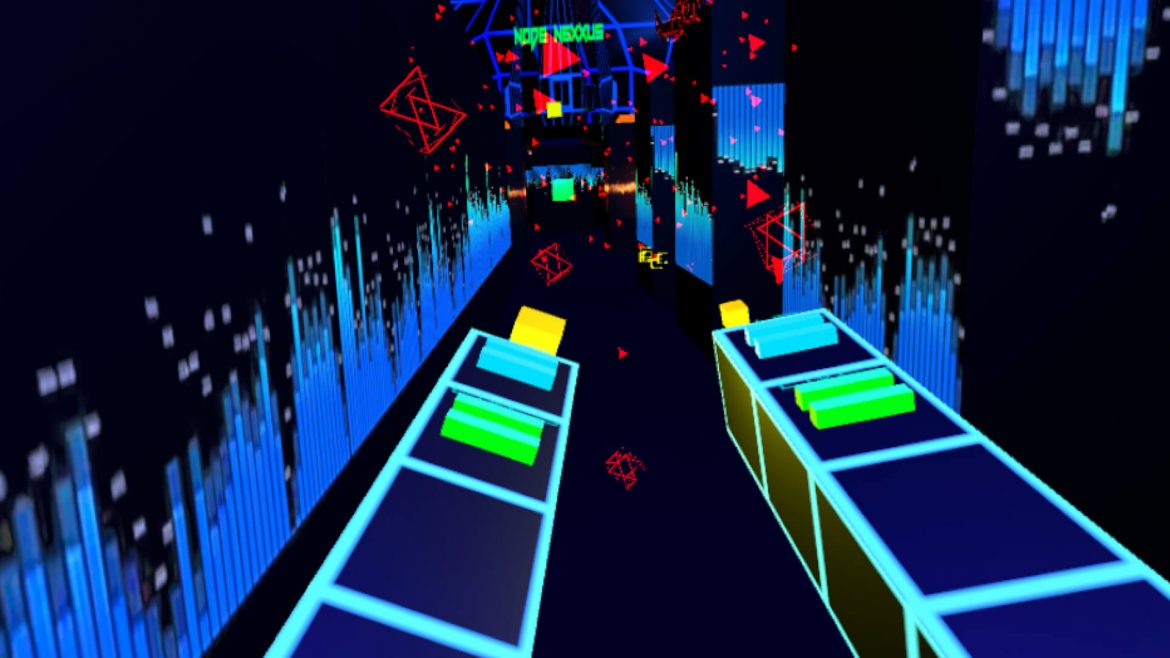 Virtual Reality might be a new and futuristic technology, but that doesn’t stop us from looking back to the good old days. The retro days. With games like RetroGunX, Cosmic Attack, and Cyberdrifter to take us all the way back, VR definitely isn’t in short supply of old-school games. The latest retro VR title to join their ranks is Trakker from indie developer GalactaVision.

In Trakker you play as a guardian of the digital realm – called a Trakker – who navigate maze-like node structures to defend against the dangerous viral intruders who want to consume all life within this cyber landscape. Trakker features 8 levels of running and shooting to the synthwave rhythms of Dashcam. The game is available now on Steam for HTC Vive at $14.99 US. We decided to check out the game and see what it has to offer, so come along for this cybernetic ride into the dark, digital underworld of Trakker.

Check out my gameplay video:

Unlike most retro arcade games, Trakker isn’t wholly linear and allows you some choice in how you want to proceed in the game. Ultimately, your main goal is to escape the digital realm, but along the way you can decide whether that’s your only goal or whether you’re going to try and defeat the viral intruders and save the system. Most of the game takes place in maze-like levels through which danger could lurk at any turn.

You’ll be tasked with defeating enemies and collecting files to slow down their attack before escaping through the exit across 8 levels in Trakker. You have two rectangular arms to work with, along with square-shaped hands that double as guns. No pew-pew sound may accompany the shooting, but it certainly felt like it should. The “guns” work fairly intuitively – a simple pull of the trigger button will send the square-shaped bullet soaring into the direction you’re pointing at. Though the aiming does feel off and I had to readjust almost every time I wanted to fire at a distant target. Each bullet does take a while to “reload”, although this happens automatically. So, some tactical thinking is needed most of the time to make sure the various drones don’t get you before you destroy the nodes they come out of.

Getting around in Trakker is also fairly simple. The game only has one mode of locomotion available – arm swinging. I’ve always felt that this mode lies somewhere in the middle of the comfort scale, so those who have problems with smooth locomotion should still be able to play the game. Though you do tire easily – especially since the game requires a lot of moving around. Plus the movement felt laggy at times, though that might just have been me not swinging my arms in one smooth arc the whole time. Either way, I have played games with arm-swinging locomotion that have offered a smoother experience.

Those Are Rookie Numbers!

Trakker provides three difficulty settings so you can make things harder or easier depending on how much of a challenge you want, from fun engagement to adrenaline-fueled panic. Plus it always allows for another replay on a harder difficulty setting, which means value for money.

Although, most of the game starts feeling pretty repetitive after a while. The environment doesn’t change in any dramatic ways and so you’re stuck feeling like you’re in an endless loop. I get that the developers wanted to stick with the cyber realm theme but in a game where the gameplay is very repetitive, you need big changes in the story or environment to help facilitate that. Otherwise, that endless loop feeling occurs. Even so, the gameplay was challenging and the maze-like structure helps create a couple of tricky spots where it’s easy to lose your health or lives if you’re not careful.

So if you don’t mind putting up with some repetitive gameplay, then you’ll be rewarded with a challenging experience in a cool cyber world.

Hands On: Kickstarter for ManMade Begins and We Take a Look at the Concept Demo

No spam, notifications only about new products, updates.
PrevPreviousTaking On The PUBG-Style Rec Royale: Review