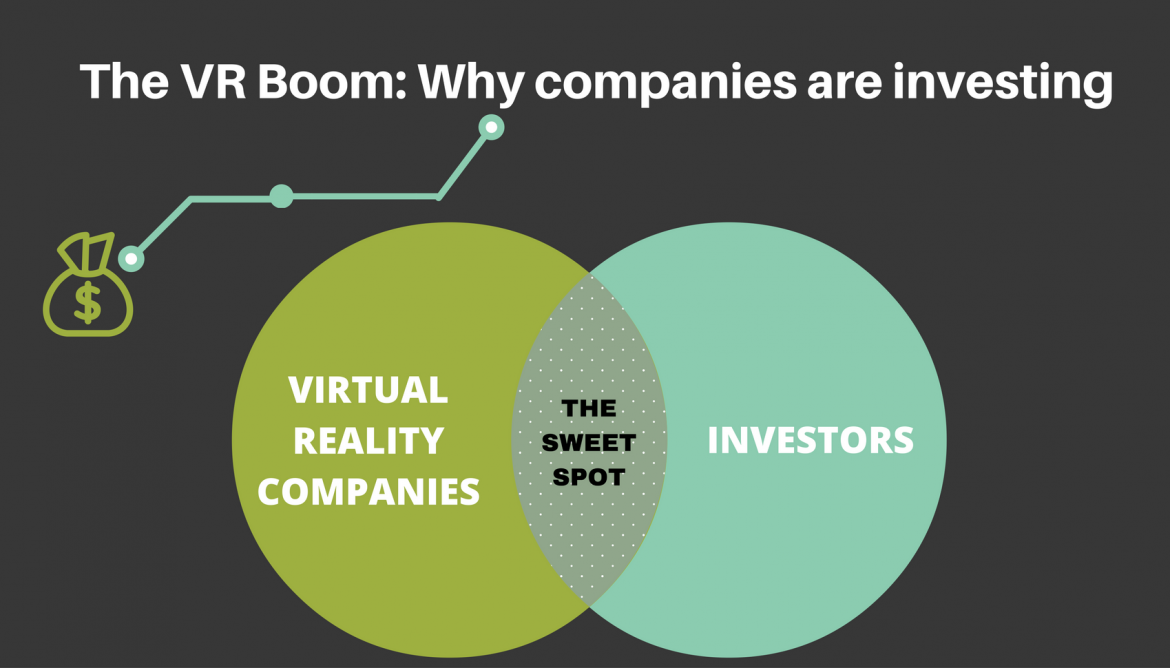 Virtual reality has been making lots of headlines recently. In less than two years, VR has boomed into a heavily funded, worldwide venture. If you had asked most people what virtual reality is three years ago, they probably would have guessed something or mentioned the Matrix.

But now, almost everyone knows what VR is and the headsets, mobile and otherwise, have been extremely popular commercially. People have been working on virtual reality for a while, but it’s only recently that the technology has gotten to the point where it can be manufactured for commercial use and shipped the world over. VR has landed in a big way and many investors have noticed.

Back in 2013, when Facebook CEO Mark Zuckerberg announced their $2 Billion Oculus acquisition, people thought they were insane. To pay that amount of money for a company working on VR technology? What the hell is VR anyway? Why would Facebook do that? And when the first Oculus Rift came out people were still skeptical. Would it be a failure like the Google glass? Would it even get enough dev support to sustain the venture with enough content? But look at them now. The Rift was one of the first major VR devices on the market and remains supremely popular.

Why Are Companies Investing In VR Tech?

Virtual reality has the capability (and will one day likely) touch on every aspect of our lives. From gaming and entertainment to shopping, healthcare and education. The possibilities are expansive. And so are investors looking to get into the next big thing’s pockets. Stock shares of VR companies are already climbing. The key to a good investment is to determine which devices are the best. Because along with the growing trend of VR came a boom of startups looking to create the top-selling device. The market is being flooded with new headsets – in the mobile VR device department especially. This is due to the fact that VR is still so new, but is expected to become a major player in various industries and everyone’s looking trying to capitalize on as soon as possible. The future sales figures for VR headsets are estimated to be huge:

Reportedly, there have been about 1.43 million head mounted display (HMD) shipments worldwide in 2016 (although Sony hasn’t released exact figures for the PS VR yet).

It’s estimated that there will be about 6 million next year.

According to statista.com the number of virtual reality users will reach 171 million by 2018. Generating a whopping 3.8 billion dollars through the sale of almost 40 million units.

But when it comes to funding, it’s not just the headset creators that are getting a monetary boost. VR gaming companies are popping up by the hundreds and are vying for funding themselves. And companies looking to further their own branding or entertainment goals have certainly noticed. And why shouldn’t they? The VR market at the moment is geared specifically towards gamers. With there currently being about 1.77 billion gamers worldwide, according to statista.com, and growing interest in the VR – who wouldn’t jump at the opportunity to reach that many people?

The revenue generated by virtual reality software is estimated to be at $500 million for this year.

Estimations predict that virtual reality software will generate around $5 billion in 2017.

Investing in virtual reality can have different positive effects for investors, depending on their goals. Firstly, there’s the obvious marketing opportunities and the expected financial rewards that come with investing in a new tech. But there’s also an opportunity for entertainment companies to be the first to create movies, series, trailers or short films for virtual reality. Now imagine that. Then there are the possible military advantages as well – like creating virtual simulations for soldiers. The possibilities really are diverse.

How Much Is Being Invested?

Corporate investment into VR has spiked recently. It took people working on the technology years to get to the point of a working prototype. Now, with all that money pouring in, companies are creating and improving devices in a fraction of the time. According to an analyst report by Pitchbook, almost $4 billion has been poured into the creation of virtual reality between 2010 and last year. This year alone the total investment sum in AR/VR has reached nearly half that.

Investors are clamoring to get their funds into the next best thing. That can get pretty complicated with all the new VR device/gaming startups out there. Investors know that virtual reality will be a great return on investment. But the question is – which companies are the goldmines and which ones will do just okay?

Some recent large corporate investments include:

This list is by no means exhaustive. So whichever the way the current flows with VR, investors are sure to follow.